Group Zodiac was created in 1979 it consisted of Latvian Conservatory students of music. The leader of the group, composer Janis Lusens, who was very preoccupied with timbre and the search of sound sets, from organs, to the Soviet Time’s first accessible synthesizers. A very significant occurrence was Lusens’ meeting with firm’s ‘’Melodija’’ Riga branch director and sound director Aleksandrs Griva. 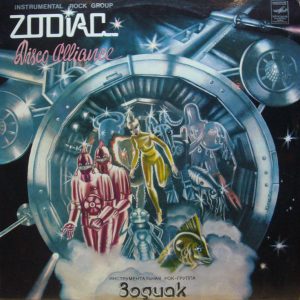 The record was made on a tape with 8 lines, where A. Griva sound director skills, composer Janis Lusens’ and percussionist Andris Reinis’ effort in the studio created the base of this music tape.

Record music and artist Franceska Kirke design of the tape caused an uprising, which inspired many people in the Soviet Union to turn to original search of creativity. Author of all composition is Janis Lusens, who was inspired by Kraftwerk, Tangerine Dream, Jean Michel Jarre music back in the day. 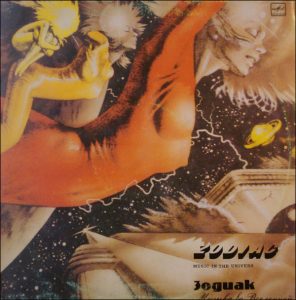 The second record “Music in Universe” (1982) – next to timbres of synthesator appears voice and a solo guitar. You can feel the influence of Funk and disco which was very present in the time. The formatting is a bright mirroing of it’s creator Maris Argalis’ individual style, where you can spot elements of erotica. The record was made on the new 16 channel line tape. Author of all compositions is Janis Lusens. 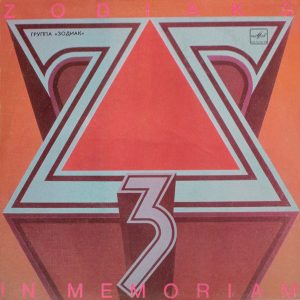 Third record “In Memoriam” (1989) – after years of working with different genres composer returns to instruemental music. To avoid soviet censoring, band’s name gets derived from “Zodiac” to “Zodiaks”. In the making of this record programmable drum machines and sequencers were used. The subject matter of music: from cosmos to the most beautiful nature and architecture scenery of latvia. Recorded on a 16 channel line tape. Sound director is the former bassist of the band Ivars Pilka. Zigfrids Muktupavels, violinist and vocalist, joins the band along Maija Lusena. The usage of voice and violin expands the palette of timre and makes the sound closer and warmer.

There are no upcoming events.